With EIKONA TMS you can bring a professional show to your cinema screens with minimal effort. The TMS creates your shows by itself and ensures that in-house advertising, mediated advertising, trailers and, of course, the feature are screened perfectly. The system takes care of the KDM and content handling. It monitors all ongoing processes and informs you about problems before they occur. Thanks to our cloud-based central management, you always have an overview of all sites.

Playlist creation including admission content, pre-show, intermission. You only have to choose in which time period or on which days, in which film, genre or screen you want to show your in-house advertising or trailers. The system then automatically creates the playlists. Of course, you can also play admission content and show trailers or advertising during intermissions.

Age rating safety system. If an employee accidentally schedules a trailer that violates the age rating of the feature, the system's safety setting is activated and the trailer will not be scheduled by the system for that film.

Integrated DCP Trailer Media Library. The trailers of your preferred content supplier can be viewed and selected directly in the TMS via API integration. This eliminates the need for time-consuming logins to various trailer portals.

Automated content distribution. Features, trailers, advertising and KDMs are automatically distributed by the system to the screen servers as soon as they appear in a playlist on the respective server.

Cleanup and backup. If desired, the system deletes content automatically that is no longer needed on screen servers. Of course, a backup is created first, and you can keep content X days after its last use on the screen server.

Control your auditorium devices. Control of screen servers, projectors, sound processors, curtains, lighting and more. The actuation of the widely used Integ Jnior controllers, for example, is already integrated natively in the TMS.

The practical early warning system informs your employees in good time ahead of a show whenever there is a problem that requires intervention. This way, show failures due to missing content or missing, invalid or expired KDMs are a matter of the past. If at any time you happen to forget something, our early warning system will inform you.

Control your auditorium from the TMS. You can control your screens from the software interface - on your smartphone using a touch-optimized view. For this you can also switch completely to manual mode for a show. This gives you the possibility to control the auditorium devices comfortably on stage, e.g. for special events with moderation or presentations.

Live information for all

The Show Status not only gives the technicians all the important show information to the current and upcoming shows in real-time - also the cashier staff as well as the cleaning staff have a perfect insight into the relevant times. For example, your cashiers can see the "real" start and credit offset time of all shows at one glance.

Trailers inside the system

In the DCP Trailer Media Library, an interface to your preferred content supplier shows you which trailers are available for a film. You can browse through the trailers and schedule the appropriate trailers for your audience in your pre-show. The EIKONA Theater Management will then take care of downloading and distributing the trailers for you. 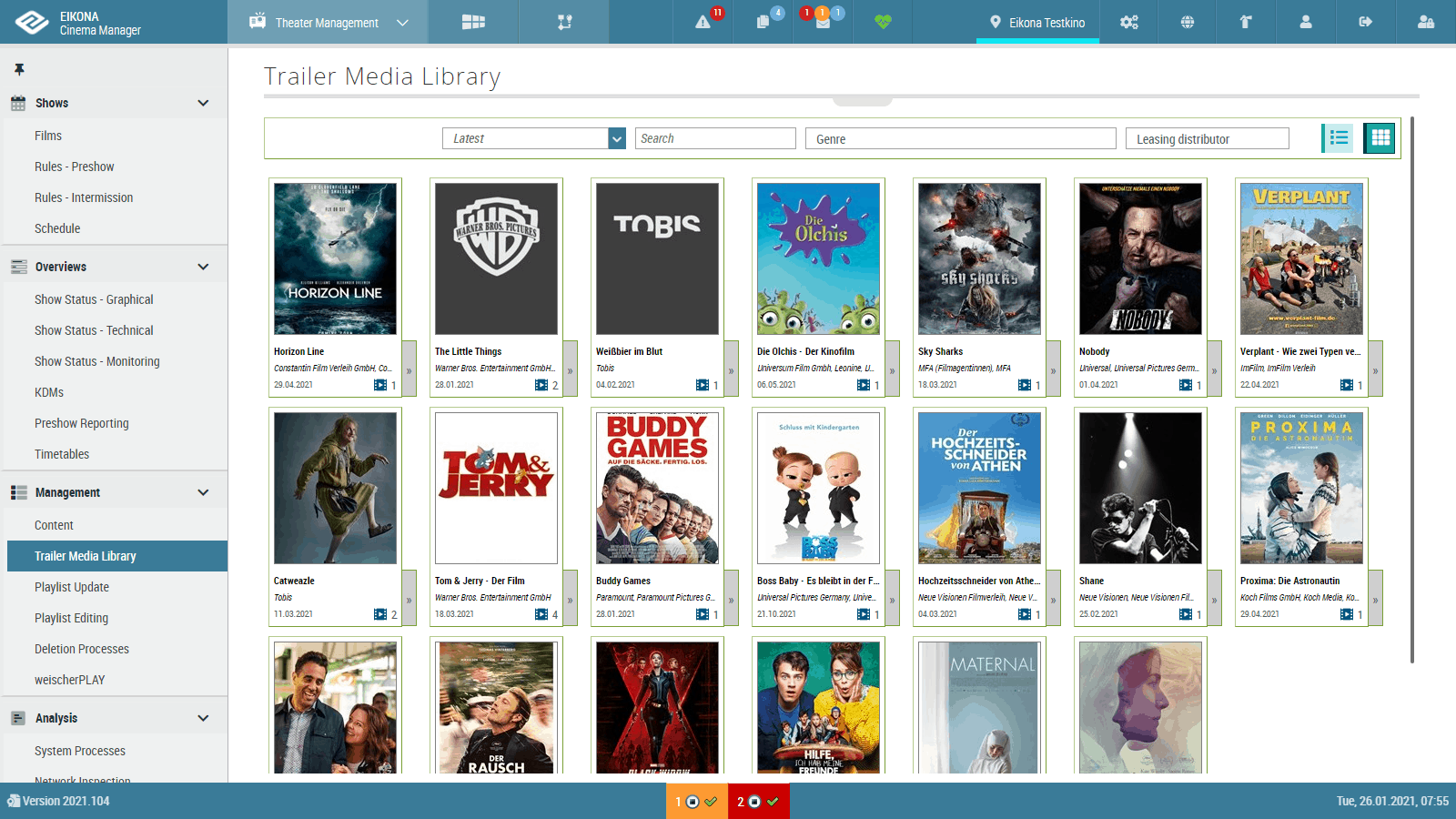 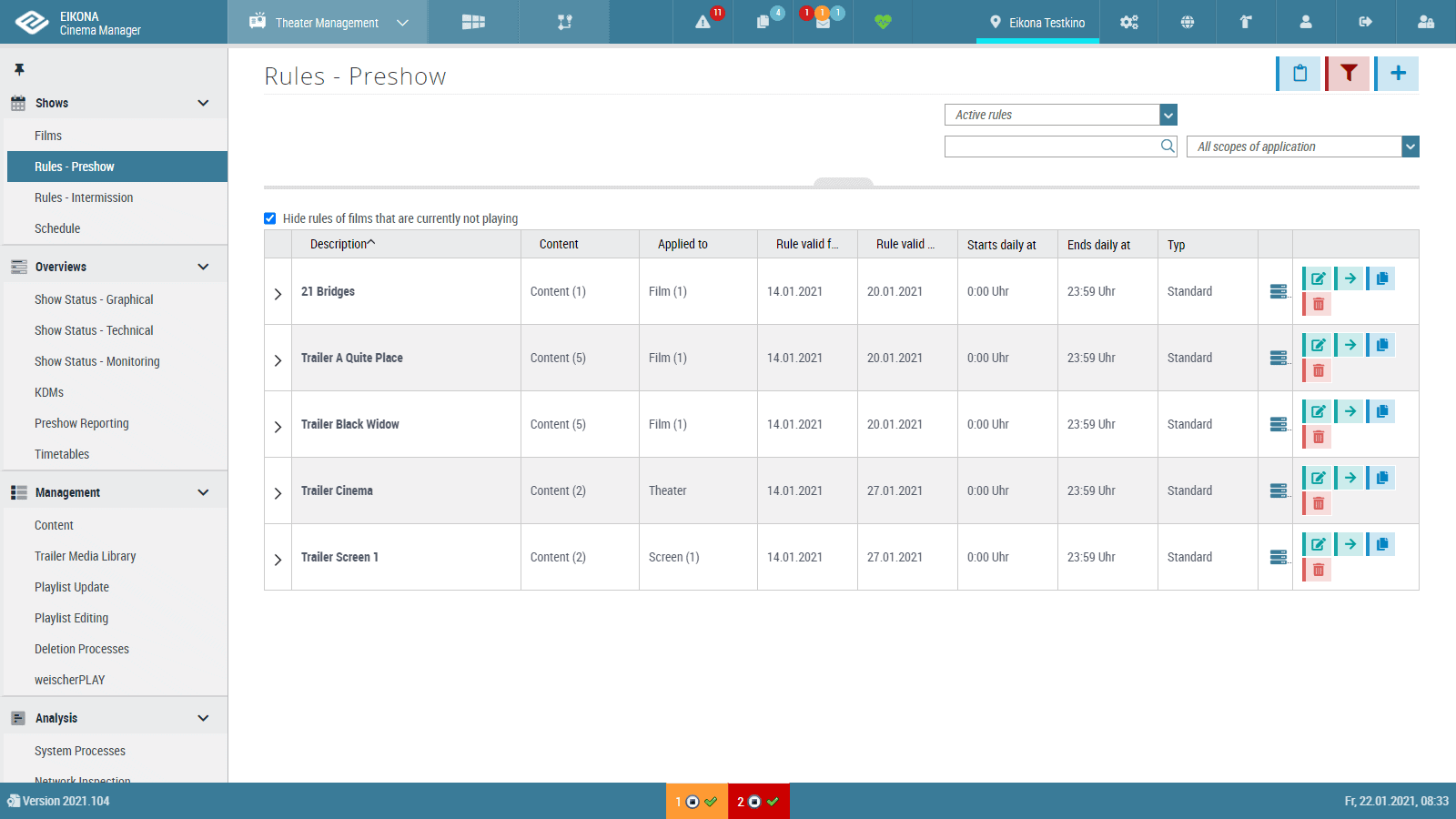 You can put your trailering together by yourself. But not playlist by playlist. You can easily and conveniently create a set of rules that you define once a week. Based on these rules, the system builds your playlists by itself. Of course, you can also plan for admission content, in-house advertising, advertising of local partners and intermission content. Advertising from your intermediary can be integrated fully automatically by the EIKONA TMS - without any work for you.

In the settings you can define individually for each screen how the system should work. So you can adapt the TMS to your needs and working methods. You can have the screen servers automatically delete content that is no longer needed. Before deleting, of course, the system creates a central backup for later use. As the screenshot shows, there are many more practical fine-tuning options available. 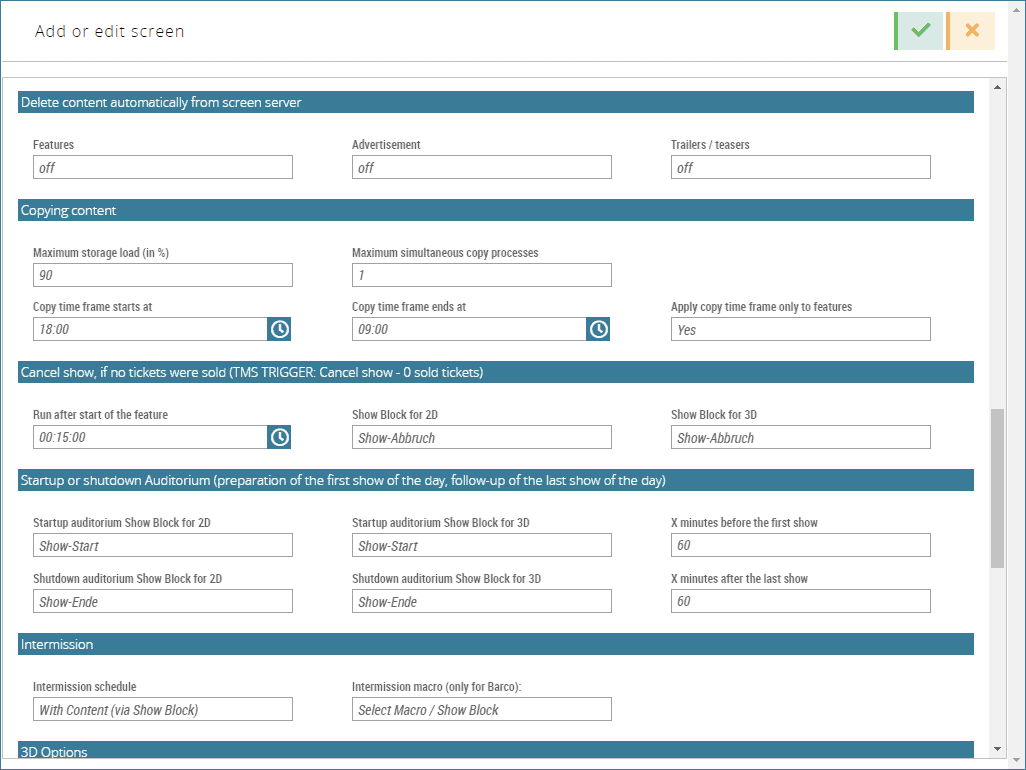 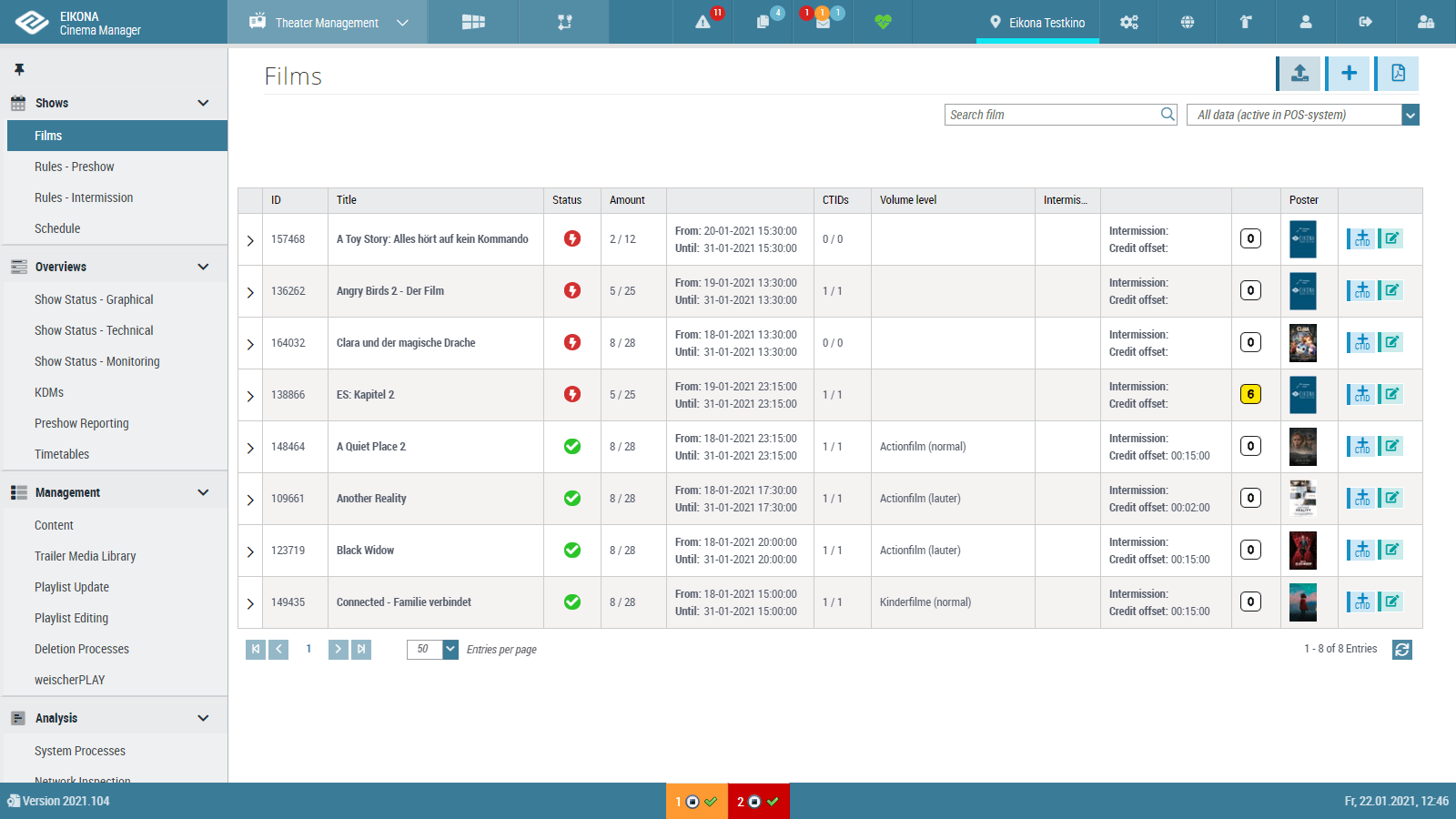 Every film is different

Via Film List you can define a large number of parameters per film or also on release level - e.g. genre, volume of the main film, credit offset 1 and 2, pause, rewind time after intermission, age rating correction. Of course, the TMS reads the information from the CPL, if available - but you can also adjust the information according to your preferences.

Warning in time = No problem

EIKONA Theater Management provides you with a clear early warning system. It indicates whether content or a KDM is still missing for a planned show, or if it would expire during the show. If your advertising intermediary books so many spots that two performances overlap in connection with your trailering, our system will warn you. You can also set up the system to automatically shorten your trailering so that no overlap occurs. This way you can correct errors before they become a problem. 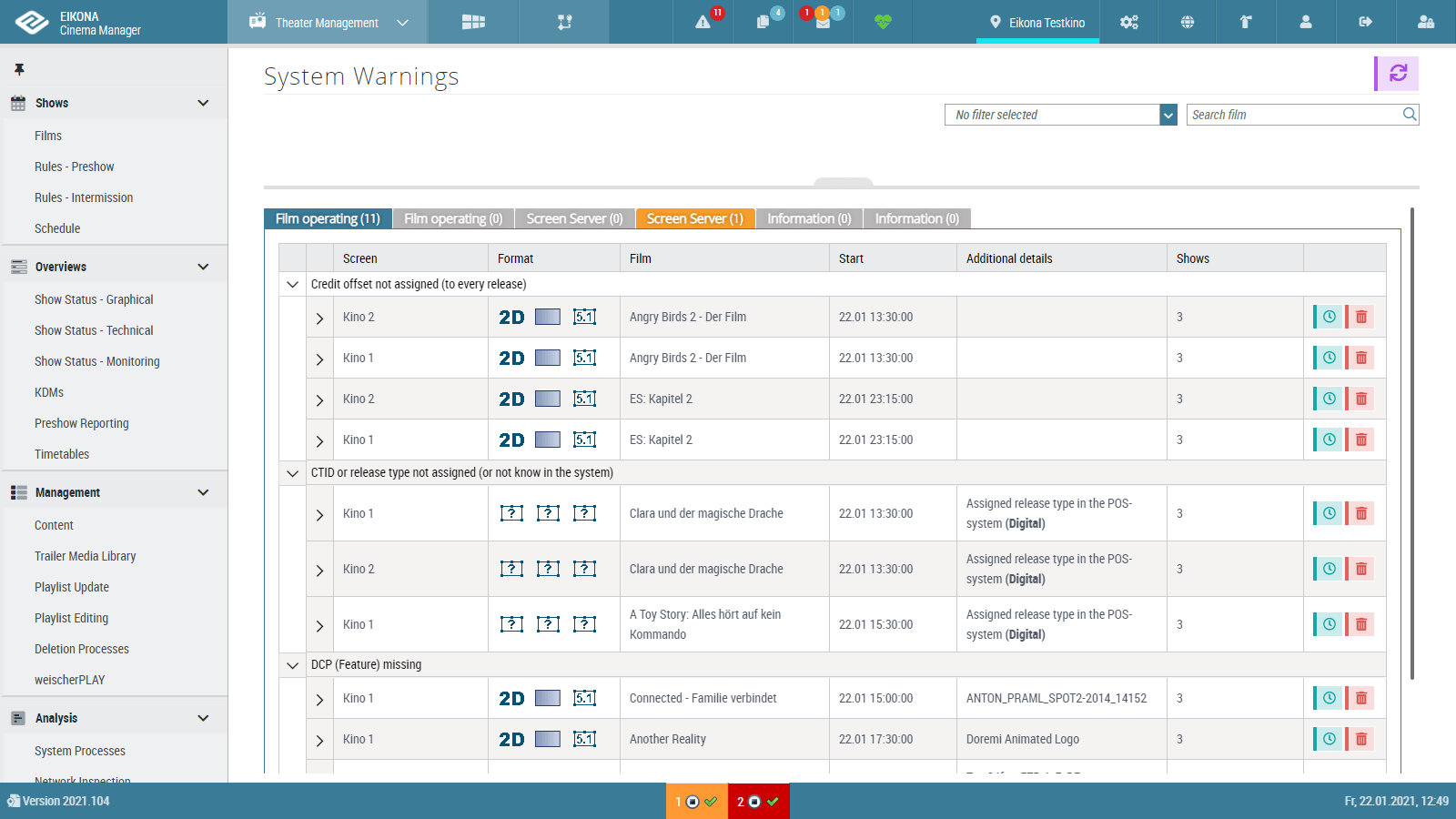